Hiii:):) I have just finished writing the article about "100 Questions for People Living in the United States" in Japanese. But the thing is if the article is in Japanese, Bill and Esther can not read this. So I decided to translate it into English. However, I am too lazy to do it all by myself so I just copy and paste to Google translate! thanks to technology! Anyway, even there are some grammatical errors or mistakes in it, please not be sensitive about them because I am doing this just for fun, not for my academic paper or something lol

Lastly, stay safe and lots of love for everyone who reads this:)

I lived in the United States until the end of March

"100 Questions for People Living in the United States"

I tried to answer 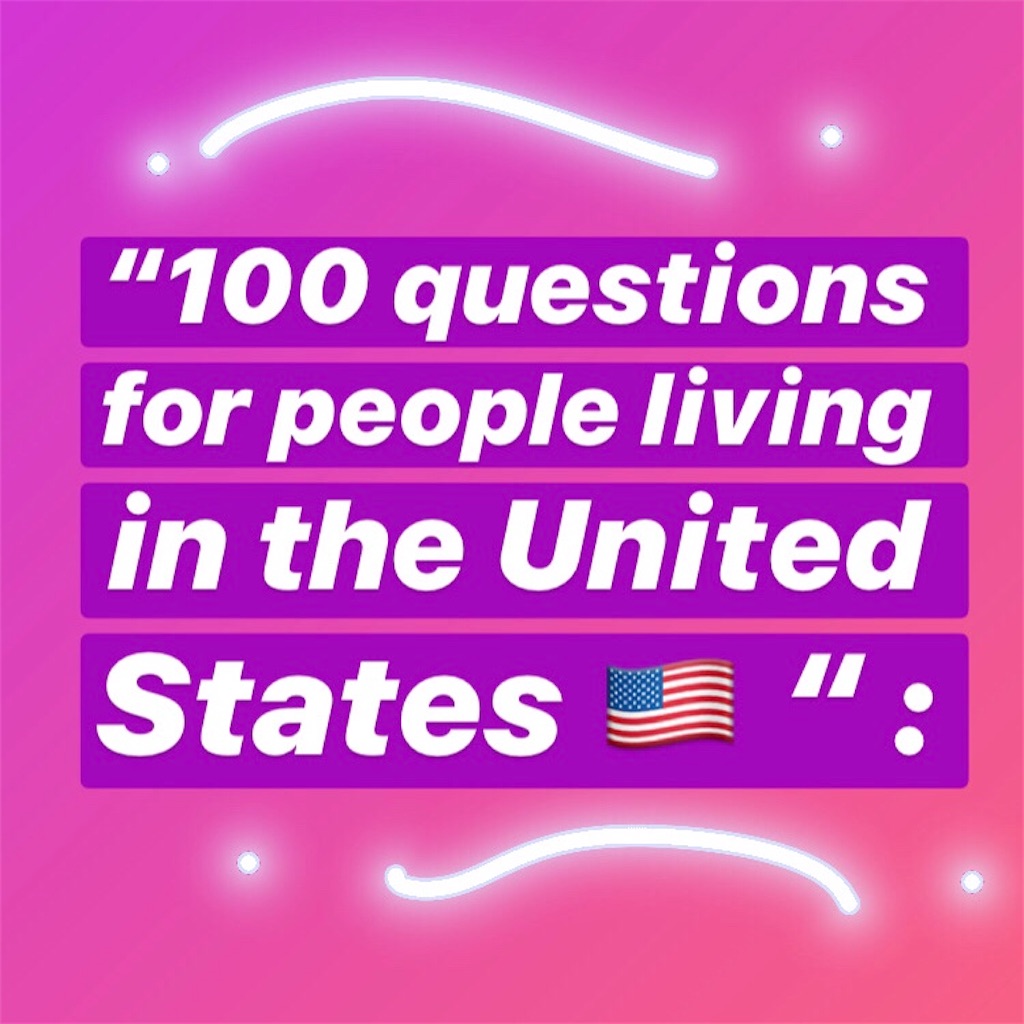 The answer will definitely change

The answer at this time right now is

I'm worried about myself

Let's do it right away!

100 Questions for People Living in the United States
1. How old are you?

3. How many years have you lived?

4. When did you come to Japan?

I came back to Japan last March

5. Where in the United States were you?

Nature is rich and water is clean. Prices and land are cheap.

7. How do you compare to living now?

I think both are good. And I think Tokyo is a big city in the world.

8. You're free in the United States, right?

I wonder if there is, I'm ready for my heart,

I was not shocked so much. So,

But the people who live were the same people

It is still impressive that the Dean said at the entrance ceremony of the university that I was aiming for a crisp rather than a flapping level.

I did not answer the question, I can not tell unconditionally because it depends on whom to compare!

12. Did you have many Japanese around you?

Few! 4 people at the same university

13. Are the surrounding Japanese fluent in English?

I was doing my best

14. What is good about America?

16. What food do you recommend in the United States?

18. Can I have a cheeseburger in the morning?

Can go at all

There are many people even if you say American, yeah

21. Let's ask about the popularity in the United States!

It ’s not my favorite thing

What was popular when I was in the United States

My image of America

32. There are Japanese restaurants in the United States, right?

I feel delicious. Is the water different? I don't know

36. Which English do you use most often?

I take it as a compliment

37. Is there a Yankee in the United States?

39. All Americans are cool ♪

So if you're Japanese you're all samurai!

41. Many questions ○○ among Americans!

There are whites, blacks, Hispanics, and Asia even though they are American

Jason (living on the same floor in the same dormitory

(I was excited about the story of Bachelor

What are American hobbies? Netflix and chilling

I say many times but to people! It depends!

46. ​​What disappointed the Americans?

If you think American people are cheerful and friendly

I realized that it depends on people

47. On the contrary, what did you find amazing?

I'm giving away something for free

Attitude to spare money for everyone to enjoy

48. Can you make American friends?

49. What kind of friends did you have?

The friends who are good and talks and is fun!

I'm a Japanese person, so there were many friends who were interested

After all, it is fun and kind friends to talk

52. Have you got an American lover?

I can't do it. Get acquainted in 30 minutes

Perhaps the values ​​for romantic feelings are different from Japanese

54. Even small children are bruised? (Laughs)

55. What did you think of American?

Suddenly American friends gather 5 or 6 acquaintances in the dormitory and play a hostage game using a car! When I really started to say.

(The story of an article about trying crazy American game. Look for it.)

56. There are many typhoons in America, right?

Hurricane name. I didn't hit the hurricane while saying

How to become a fire alarm during a job-hunting web interview! There was something

(Please look for it because I think there is an article)

Is that so? Have you started?

Well it was a lot

62. Did you change your image before and after you went to the United States?

It may not have changed that way.

I want to go to see my friends!

I mean the image of America

The image of the person I met there might be stronger

I only met the principal of the university

Because Wisconsin is not Beverly Hills

I don't think it's that great

68. Is there a karaoke in the United States?

There was! About the dormitory, Karaoke night was planned

Certainly wide. You can't do anything without a car.

It wasn't wide because it was a dormitory!

I did it! It was fun

I feel that image is correct

74. What is the decisive difference between Americans and Japanese?

If you feel better, start dancing or not

The language of English itself is a clear language

I'm pretty clearly saying what I thought even in Japanese

Toyota, Honda, and Nissan all knew

80. So what about Japanese culture?

Anime and Pokemon were popular and everyone knew

82. Japanese culture is proud of overseas!

To be proud or famous.

83. What was a social phenomenon in the United States at the time?

What else? Personally Bachelor 24

He was the same person as us

86. Have you seen the Statue of Liberty raw?

I saw the Statue of Liberty sinking in Madison's Lake Mendota

It was very popular. I also took pictures.

88. What did you think of Japanese people?

I thought it was Naruto

Probably? R and L pronunciation are easy to messing up

90. What was the worst thing in America?

91. On the contrary, what do you think is the best?

92. Want to return to the United States?

I want to return to America!

93. What is in the United States but not in Japan?

94. What is in Japan but not in the United States?

A boyfriend who has been waiting for me!

95. What was your most enjoyable memory?

Cold midnight! When I ran with Esther and Bill and returned to the car

Fight forward because it will be fun!

If you want to balance studying abroad and job hunting

It depends on how serious you can be!

In fact, I could!

Have fun studying abroad in the US!

let's go! I want to go to Madison and Chicago

99. What is the United States in a nutshell?

Playing with Esther, Bill, and Madison!

After all, if I say America

I have a strong white image

There are actually a lot of races that are not so

The prejudice of the questioner is too strong